Three Museums and Their Three Guards

Well, the word “guards” might be too much. We are speaking of sculptures located near the three branches of the M. K. Čiurlionis National Art Museum. Although younger than the buildings, they are so naturally coalesced with them in the minds of passersby that if they were to disappear for any reason, a real confusion would ensue. It arises even when someone decides to artistically modify – dress – one of the most famous sculptures. But let’s start from the beginning – that is, from the main museum building, the modernist crown of Kaunas centre.

It is difficult to imagine the facade of this museum, which was finally completed in 1936, without Vladas Vildžiūnas’ sculptural group Kings. This work is described in the catalogue Vladas Vildžiūnas (compiled by Stasys Budrys) published in 1970.

A group of three large sitting figures made of welded copper plates at Kaunas M. K. Čiurlionis Gallery (1967–1968) is a monumental decorative work that became the most prominent one in V. Vildžiūnas’ career. In it, you can feel not only the spirit of Lithuanian folk sculpture traditions, the unique individuality of the artist so similar to it, but also the Čiurlionis-like synthesis of images and the plastic. With this sculpture, V. Vildžiūnas continues to solve the problems of spatial plasticity. He provides the sculptures with proportions that give the openwork group grandeur, inner strength, and Čiurlionis-like musicality.

A bell hangs in the chest of the central figure. It is like the bell of M. K. Čiurlionis’ oeuvre, ringing in its Spring triptych; it is like a symbol of a human with a bell in their heart, announcing the spring of mankind…

Symbolic images organically blend into the compositional whole of a sculptural group. The title of the work is conditional – it is difficult to find a suitable name for it. We will conditionally call it Kings, which can be found in M. K. Čiurlionis’ paintings (Kings’ Tale, Rex). In this case, the ideological and artistic essence is of the utmost importance, it is both Čiurlionis-like and Vildžiūnas-like. The undefined plot gave the author the opportunity to have many pictorial associations and a polysemous and ambiguous thought.

Time to move to Kaunas Picture Gallery, which was built in 1978 to accommodate Mykolas Žilinskas’ collection. Unfortunately, when it didn’t fit there, the gallery, which is fostered by Creator, found a new meaning on the map of culture and art. The author of the sculpture, Jadvyga Mozūraitė-Klemkienė (1923–2009) was a sculptor and a graphic artist who has created many sculptural portraits of famous people, and for that, she was often labelled the chronicler of her time. J. Mozūraitė-Klemkienė’s work fascinates with its measured style, generalized forms, sensitivity, and hints to the art of Antiquity and Ancient Egypt.

J. Mozūraitė-Klemkienė was also an employee of the museum. From 1993 to 2000, she worked here as a restorer. She restored such large works as Juozas Mikėnas’ Pensive Christ and Petras Rimša’s Lithuanian School in 1884-1904. Many of the artist’s works are kept in M. K. Čiurlionis National Art Museum’s collections. In 2008, she donated 87 sculptural objects and 523 graphic works to the museum. One of her works is not only heartily protected but has also become the highlight of Kaunas Picture Gallery approaches. It is a generalized and sensitive sculpture depicting a woman, called Creator (1983). What is she looking at? Perhaps at A Man that awaits us at the last stop of this short walk?

A Man (or perhaps a boy) that has acquired various nicknames during his lifetime, stands with his arms outstretched next to M. Žilinskas Art Gallery. It is the work of the sculptor Petras Mazūras (b. 1949).

Probably few know it but the architects Saulius Juškys, Kęstutis Kisielius, and Eugenijus Miliūnas, who worked hard on the building, had a completely different work in mind for this place. Sculptor Juozas Mikėnas’ work The First Swallows (1964) was supposed to stand here. After the government forbade it, the sculpture did not decorate the M. Žilinskas Gallery and only a few years later, in 1987, The First Swallows became the symbol of the National Gallery of Art in Vilnius.

The gallery in Kaunas had to look for another work. An open competition was organized. Although it wasn’t successful, the architects discovered P. Mazūras. At first, he imagined a woman – Nike, the goddess of victory – next to the building. However, the theme of antiquity was symbolically crowned with A Man, specially adapted for this gallery. P. Mazūras indeed based his sculpture on the traditions of antiquity: realistic depiction of the body and exaltation of naked beauty. Nevertheless, P. Mazūras supplemented the realistic depiction with a supernatural detail. According to him, A Man had to have descended from heaven, and this extraterrestriality in the sculpture is illustrated by the cosmically fluffed hair. By the way, this sculpture is also referred to as Milky Way or even Child of the Stars.

Not everyone liked (and likes) Man’s nakedness. Ever since the sculpture was erected, its evaluation has been controversial. Protests were organized against the Man; priests from St. Michael the Archangel’s Church complained. The employees of M. Žilinskas Art Gallery remember that the sculpture was even showered with eggs during one Easter.

Indeed, attempts have been made to dress A Man to this day, and during this period of more than thirty years, the sculpture has changed more than a dozen clothes. The first such action took place in 1992 when the students of Kaunas Art Institute: Aistis Baltušnikas, Žydrūnas Šlajus, and Darius Tumšys, put on a pair of men’s shorts of the sculpture. Later, P. Mazūras’ work was decorated with various costumes. The sculpture was turned into Santa Claus, wrapped in Žalgiris scarf, put on a skirt during last year’s Kaunas 2022 event SkirtBike, and an apron during Kaunas Cooks event. It is interesting that in 2005 art collective Cooltūristės supplemented the Man with the main attribute of the Juozas Mikėnas sculpture First Swallows, which was supposed to stand next to the gallery according to the original plan. The sculpture has also become a souvenir – you can put A Man pin (from It’s Kaunastic series) on your lapel. And how would you dress A Man?

Prepared in collaboration with the M. K. Čiurlionis National Museum of Art 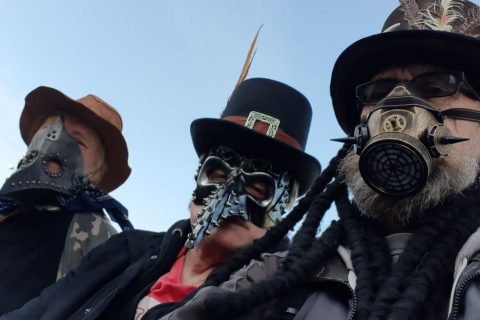 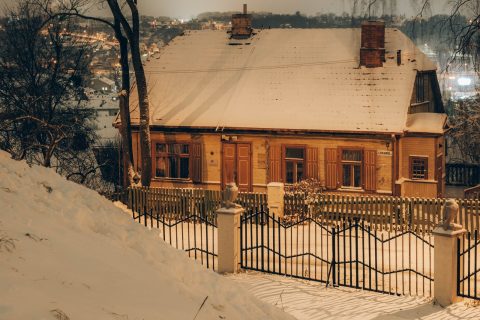 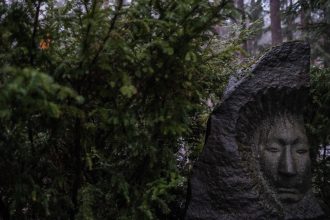 From Uncle “Burst” to the Winner of the National Prize