Free Fortress of Freedom (News From the Forts of Kaunas)

Each time I encounter Egidijus Bagdonas, who has officially become the head of Kaunas Fortress Park this summer, he reveals a new secret about the walls that surround Kaunas. Not because he keeps them tucked away in the drawer but because he continues to discover new things while exploring the 14 forts and hundreds of other fortress buildings in the city and the district with his crew. This time, Egidijus invited us to meet … wait for it …. at the artillery warehouse complex on the left bank of the Nemunas River. More precisely, one of its parts on Lakūnų Road. It sounds and looks romantic.

After getting on top of the hill that covers the warehouses, you feel like an explorer – a previously unseen panorama of the well-known city opens. There is a romantic quote:

“Sometimes, as I walk on our paths and see a tomb of some German Fritz, whose bones lie next to the remains of a Russian Ivan, I ask myself, “Why did these two fight each other and die back then? Would it be easier for that Fritz from Hanover if some Prussian Von something, was to grow fat using the sweat of a Lithuanian farmer? Would Cossack Ivan from Ural get rich from the oppression of the uriadnik in Lithuania? But apparently it was destined that the downtrodden, the third one, had to win the battle between the two oppressors. The third one, who took care of his land for ages, watered it with his sweat, mourned for it, and died for it. These were the thoughts that haunted me when I was looking at the Kaunas forts after meeting with the General of the Royal Swedish Army, Mr. Reutersward, who came to Lithuania on August 28. I was especially pleased that this time an honourable Swedish guest saw a new – Lithuanian – Kaunas this time from the same upland of Freda.” (Colonel Stasys Zaskevičius, Lithuanian officers’ newspaper Kardas, September 15, 1935)

It is windy, so we move to one of the vaulted warehouses to talk more about what’s new in the 19th-century fortress. The warehouse, lined with simple, fragrant wooden boards, became a cozy fortress office. Or perhaps the headquarters.

Maybe many already know, but it is worth reminding that Kaunas Fortress Park takes care of only a part of what is left of the Russian tsar’s ambitious project. Sixth Fort was transferred to the Vytautas the Great War Museum, the Seventh Fort was privatized, and the Ninth Fort is a museum.

Part of the fortress, and thus part of the park’s objects are part of the city and the other part is in the territory of Kaunas district municipality. But in principle, the park and those who decide to carry out activities here are responsible for what happens in the forts, warehouses, and other buildings. And they are very diverse, including an exhibition of nudes and poetry reading at the well-known Parakas of Šančiai, traditional and non-traditional festivals, and finally, paintball.

“We sometimes hear that we are not specific, but we have the freedom to be like that,” E. Bagdonas smiles. He thinks that it is through the flight of thought and expanding the imagination that Kaunas Fortress and its growing community stand out from similar historical objects elsewhere in Europe.” Once, the fortress surrounded the city, later it was ignored due to security reasons and now people are gradually embracing it.”

Fortress cities, which are looking for ways to be relevant in the 21st century, are united by the EFFORTS network, one of the founders of which in 2017 was also Kaunas Fortress. At the end of next year, we are planning a European Fortress Congress, which is included in the Kaunas 2022 program. But it is still far away. You will find reasons to visit a fort again or for the first time this weekend. Even later, during the bat hibernation period in winter. We are currently talking to conservationists about how to visit forts safely during the winter because nocturnal creatures usually do not rest in the whole fort, but only in some part of it. Perhaps it will be enough to have warning signs and fences at the objects that are not favored by bats and the tours will be able to continue.

Egidijus remembers that there were attempts to cover several forts during one tour, and admits that even himself, the fortress enthusiast, was unable to maintain the focus after an hour. Therefore, it seems more meaningful to have more specified walks for those, who are interested in specific topics (military science, nature, engineering). They are led by both guides working in Kaunas Fortress Park and independent professionals. In September, the park will invite you to course for tour guides. Perhaps it could become your “extracurricular activity.” In the spring, such courses took place in the Domeikava (there is an unfinished fort there, which was affected by the war) community, which is very interested in its environment, and around ten locals completed the course and became certified guides.

It is the forts affected by the war that Egidijus and his team focus on. Properly cleaned, uncovered, and preserved ruins are every interesting! The head of the park laughs that during World War I, the Germans attacked Belgium chaotically but tried to overtake Kaunas through the Second, First, and Third forts with real precision. Architect Mantas Maziliauskas is turning one of such holes left by the Bertha cannon into a sculptural object in the First Fort. When viewed from below, it will look like a dome, like the eye of Bertha, and when viewed from far away, perhaps like a lair of the Mythical Beast of Kaunas. We’ll find out later this month.

By the way, there were discussions in the summer about the light installation created by Linas Kutavičius at the First Fort (he was invited by Kaunas 2022): is it art or distortion of heritage? There will probably be debates in September too, as well as later, after all, it is not a one-day-old object. Maybe it will even become as important as the Vilnius’ pipe. Egidijus looks at it philosophically. According to him, the contradiction of opinions, the war of ideas – agnosticism – is a force that creates narrative and history. “Maybe the fortress of freedom is a straightforward thought but that’s how I see our work. After all, a few would call Laisvės Avenue or the Garrison Church a symbol of occupation, and yet they are a legacy of the same era. People need some time.”

. There is no goal to restore and rebuild everything but to preserve what has survived and remained.

Let’s get back to the location of our conversation. Next to the headquarters of the fortress’ commander, there are more premises of a similar size, all connected. One will be equipped with a kitchen, the other will be open to creative ideas. Unfortunately, glass doors did not survive in all of the warehouses’ facades. Perhaps they were used for light. You can see how the warehouses on Lakūnų Road looked like during the interwar period in the photography exhibition located in the yard. During the period when the fortress was used, cannons were handled here, and after the territory was taken over by the Lithuanian army, the headquarters of the armored team and the tank garages (the French, ones that were used in World War I and later repurchased) were established. There was also a canteen, the food of which was liked by Smetona himself. Pilots lived nearby since the airport and aviation workshops were close. During the Soviet occupation, aviation fuel was stored in warehouses. And then…

“Local residents keep coming and telling something interesting, for example, that the first scrapyard in Kaunas was located there. Of Soviet cars. The chimney above the warehouses is still covered with a roof of a car and we continue finding car parts,” E. Bagdonas shows us around the yard.

They use anything they find around. Trees and stumps from the forts heat Kaunas buildings in winter. There are suggestions to heat the warehouses and forts with the biofuel found on the premises, “Last year, I was warming myself up here with a stove.” Various other finds make beautiful art. In this year’s January issue, we wrote about architect/artist’s trash sculptures in the Eighth Fort and the steampunk metal sculptures in the Third Fort. The principle of sustainability is important both in the processing of these finds and in putting the fortress to work.

This time I and photographer Donatas Stankevičius did not visit the nearby gunpowder depot, but we hope to be invited to any concert there soon. The thickness of the concrete walls of this building is more than 2 meters, it is said that it was once one of the safest structures in Kaunas. It would also be safe for the music of various genres. The place can accommodate around 500 people.

Egidijus added this after we left the Pilotų Road. The staff of Kaunas Fortress Park is finishing the installation of the visitor’s room in the Third Fort’s barrack’s guardroom. “Last year, we excavated a cobble-stone pavement, installed a footbridge. In the visitor’s room, during the working hours, the guests of the fort will be able to meet a guide, see the layout of the fort, exhibitions, have a cup of coffee, and learn about other forts,” our busy bee interlocutor, who took a liking to cleaning during the quarantine, intrigues us. He also adds that protective roofs will be installed in the Fourth and Third forts this year, in order to preserve the crumbling cornices of the barracks.

“This is one of our crucial concerns for the future: to preserve as much as we can of what has survived, to stop the erosion, to protect it from collapsing. There is no goal to restore and rebuild everything but to preserve what has survived and remained.” The head of the crew jokes that perhaps that strange state between fighting (karyba) and creating (kūryba) is a constant and true state of a Kaunas resident. Anyhow, we are glad that we are not fighting anymore but rather getting to know the fortress of freedom better as well as the free space where we can work and create. 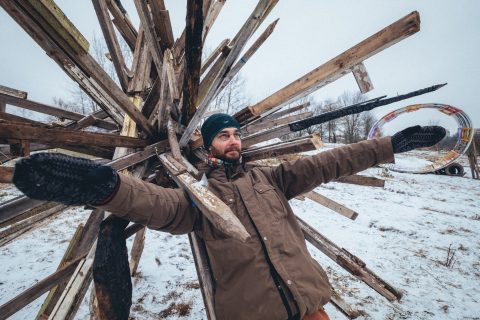 Rubbish as Material for art