4 September, 2021, Editorial staff of Kaunas Full of Culture | News, Topic of the month

Some are a hundred years old, others are younger, but the statistics of museums’ age is impressive. The youngest is not even a half year old: a private Art Deco Museum located on Gedimino St 48, officially opened this summer. So, it is the hottest news of the year. And in the fall, it is time to visit other, perhaps undeservedly forgotten, institutions that present us with one amazing idea after the other. After all, it never rains in museums.

Back in July, the Lithuanian Education History Museum pleasantly surprised us with the invitation to the exhibition of René Magritte’s lithographs. It will be running until November 1. “This exhibition was our first big challenge, but the goal was achieved. Romuva’s outdoor cinema, which has been operating in the yard all summer, is also our new project. We also have many ideas and plans for autumn,” the museum’s representative Rūta Medinienė says and immediately invites to change your plans if you will be having a class reunion soon.

“In September, we invite those, who do not have the opportunity to return to their homeland or are just looking for an interesting place, to organize class reunions at the museum, where we have a new place for that – a classroom. We have recreated a cozy classroom atmosphere: desks that smell of fresh paint, a blackboard, a teacher’s desk, closets full of interesting teaching aids,” R. Medinienė reveals. She ensures that you will have an opportunity to solve a math problem again or try your luck in cursive in educational sessions The Power of Mathematics and Calligraphy.

Two museums that share one of the most impressive buildings in Kaunas, erected during the period of the First Republic, are celebrating their centenaries this year.

The official date of establishment of the M. K. Čiurlionis National Museum of Art is December 14, 1921. A temporary M. K. Čiurlionis Gallery was opened on Ąžuolai (now – Pelėdų) Hill only after four years, in 1925.

In 2022 a joint exhibition of Kaunas City Museum and MO Museum will take place in the aforementioned historical space. It will be one of the highlights of Kaunas 2022 program. Exhibition Lithuanian Art in 1900–1940, which was opened at the beginning of this year and will run until the end of November, has become a highlight of the museum’s centenary. The exposition presents artists and their works that were showcased at the first Lithuanian art exhibitions.

Another highlight of the Čiurlionis Museum’s anniversary was naming of the institution’s library – a real treasure trove of art publications – in the honor of the long-term head of the museum, who passed away last year. The “direttore” himself, as the colleagues referred to him, donated about 2,000 publications to the library.

A beautiful campaign is taking place on the museum’s social networks, during which the contemporaries of the institution, who live in Kaunas, are congratulated. If there are people in your family celebrating their 100th birthday this year, get in touch, they will be pleasantly surprised. Also, until September 14, a game Visit the Museum and Win a Friendship, dedicated to the jubilee year, is taking place. In it, you can win a very valuable reproduction of Čiurlionis’ work.

A centenary is a great opportunity to visit the departments of the M. K. Čiurlionis National Museum of Art. An exhibition showcasing the life of architect Arnas Funkas is taking place at A. and P. Galaunė House Museum (designed by Arnas Funkas), the former residence of Čiurlionis Museum’s first director. And a brand-new exposition will soon be installed in a completely renovated sculptor Juozas Zikaras House Museum. We promise a reportage.

It’s time to pat the lions of the Vytautas the Great War Museum. These are the younger ones, and they came as a gift from Biržai. Vytautas the Great War Museum is the first museum established by the state that has celebrated a 100th anniversary. Its birthday coincides with the Restoration of the State Day on February 16. Unfortunately, this year it was completely paralyzed by cold and quarantine, so one of the oldest traditions of this museum – a general invitation to visit it free of charge – was postponed. But on February 16, an extremely modern exhibition Starting Point dedicated to the centenary was opened by a modest number of people physically yet was widely available online. Artist Jolita Vaitkutė, who has an exceptional style, tried to make the exhibition visible from a single point.

But the anniversary celebration will definitely happen! On September 8, cannons will roar, the orchestra will give a concert. The program will also move to Vienybės Square, and you will find the information on the magazine’s calendar. A conference dedicated to the 100th anniversary of Juozas Lukša-Daumantas is also planned in the jubilee program (on October 12). An unexpected event Robots in the Army await on November 10.

In it, the soldiers of the Explosive Neutralization Company of the Juozas Vitkus Engineering Battalion of the Lithuanian Armed Forces will talk about people whose difficult job requires a lot of knowledge, maximum concentration and patience, ability to focus and make the right decision in a moment of danger. Vytautas the Great War Museum centenary’s finale will move to the 4th Fort of Kaunas Fortress, where you will be able to visit an exhibition of military equipment. A Soundscape in a Landscape event of light and music is planned to take place there on December 4.

Dances that don’t fit in the hall

We have just written that the Vytautas the Great War Museum was the first museum established in independent Lithuania but… Kaunas City Museum is older! Its history dates back to 1882, and it would probably be possible to organize a separate tour of all the former and current spaces of this museum, presenting the most interesting personalities who worked here. But let’s focus on these times and this year specifically. The museum’s City Hall department is eagerly awaiting reconstruction, but the relatively fresh news is that when visiting the “white swan” you can ascend to its tower, which is 53 meters high. Already done? Then get down, cross the Town Hall Square, then all the way Muitinės Street, then Kurpių Street and finally turn right to L. Zamenhofo Street. Time to visit Kaunas City Museum’s Folk Music Branch. Specifically, in the section between its event hall and the museum itself. Get ready to break a sweat – we are going to dance.

Head of the department Gintarė Dusevičiūtė-Neimontienė clarifies that traditional dances have been taking place in the event hall for 12 years – every first Monday of the month. However, when planning new activities during the pandemic, it was decided to rethink the aforementioned one: why shouldn’t we exchange the closed space into an open one and start the new dance season in a meaningful and noisy way? So, the first session (or perhaps a hundredth for you, it does not matter at all. Both beginners and the advanced dancers are welcome here) will take place on September 6. At 6 p.m. you will be learning the steps and later, with the musicians’ help, you will be able to dance until 10 p.m.

“The folklore ensemble Serbentėlė from Domeikava Gymnasium of Kaunas district promised to play along with the old-timers of our dance evenings Kauno bandonija and others, like a newly formed ensemble Senamiesčio muzikantai,” G. Dusevičiūtė-Neimontienė shared the musical repertoire. When asked if the employees from other departments of the museum participate in the dance evenings, she smiled and said that everyone is always invited, but perhaps many haven’t discovered these evenings yet. She also hopes that this format of the event will attract other colleagues and people in general, who haven’t visited the museum yet. “Although, of course, most of our loyal visitors come from the community of dancers.” Some even got acquainted here and became partners not only in dance but also in life.

Two open-air evenings of Dancing Street of L. Zamenhof are planned but after October, as you know, comes November… However, the organizers hope to extend the tradition in spring. Maybe after the pavements and streets are fixed, the event would blossom into a dancing Old Town. Why not? Even though an event with such name already exists, the folk-dance evenings could expand. After all, dancing on the street is a century-old tradition, which is not subject to regimes or state borders.

With raincoat and headphones

Recently, Kaunas Ninth Fort Museum, which is becoming more and more open to various contemporary and traditional art initiatives, invites you to get to know the Ninth Fort of Kaunas Fortress as fortification in a smart and meaningful way. You can do this at any time that is convenient for you using the Actionbound app. You will find the QR code that opens the route near the parking lot and next to the Occupation Exposition building.

Another app that will enrich your experience in this historically important and sensitive place is the Kosmos App. It was created by the Kosmos Theatre, which constantly pleasantly surprises with its solutions. It is like a musical memory trail, the geolocation route – nine musical tracks for the objects of the memorial complex.

The theatrical composition Reconciliation extends the outdoor exhibition The Breaking Points of History. Reflections of the Place, which was running since spring. After all, the breaking points in Lithuanian history – significant changes in the life of society – are especially evident in the history of the Ninth Fort. The open air exhibition presents the main stages of the Ninth Fort’s history in the context of the country: the collapse of Kaunas Fortress during the First World War, the establishment of a prison in the fort during the interwar period, the deportation and imprisonment of political prisoners during the first Soviet occupation, the massacre during the Nazi occupation, the establishment of a museum and the construction of a magnificent memorial as the shackles of occupiers were loosening up, and the renewed expositions after the restoration of Lithuania’s independence.

And although we state in the introduction of the article that it doesn’t rain in the museums, it is best to walk around this complex on your own in a really bad weather. Maybe then we can understand a bit better how good the newest generation has it. 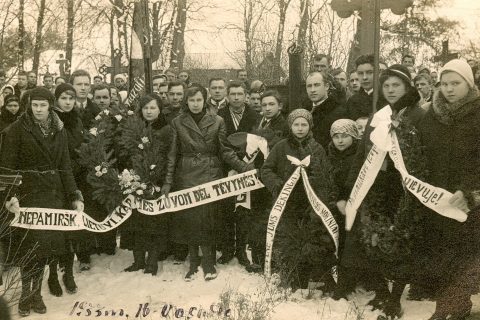