“Why night? Because the senses intensify at night”, explains Kristina Mulevičienė as she leads me through the beds of blooming peonies. Truth be told, we meet at the VMU Botanical Garden on a cloudy Monday morning. Until now, there haven’t been any heavy rains during the Night of Scents – and it is the ninth year of the event – only record heat waves.

The head of the Service and Education Department of the Botanical Garden of VMU remembers that the history of the biggest botanical festival in Lithuania began with another day that is celebrated all over the world. This is the Fascination of Plants Day that takes places annually on May 18. The event aims to draw attention to plants to encourage people to be more actively interested in the importance of plants and the multifaceted significance of their research. The coordinators of the Fascination of Plants Day in Lithuania are scientists from Kaunas. In the past, something similar to what we now know as the Night of Scents was organized in Marijampolė, but the garden there is small, so the festivity became more massive after it “returned” to Kaunas.

The program for this year’s celebration is still being developed. Kristina keeps getting notifications on her phone while we are walking around the garden. She is dealing with individual artists, producers and theatres. More and more people, wo first participated as visitors, gain confidence and offer their ideas. The topic of 2022, which unites all the participants and parts of the program, is forest. You may have noticed that in recent years, more and more musicians and event organizers are discovering the VMU Botanical Garden. From classical to modern rhythms. The old Freda Manor becomes a place for inspiration and discovery for both musicians and visitors of the events. “Young people, who have never been here, come and say: wow, this is quite the place! That’s why we willingly host concerts, this way we can reach a new audience,” Kristina observes. So, this year, some organizers decided to invite the legendary French ethnic electronica duo Deep Forest.

Forest… Everybody liked the forest! So, the French will perform in the garden on the eve of the Night of Scents and the forest theme will continue even after the show ends. Maybe we shouldn’t be talking about the night, but rather the nights, the whole festival of scents. Maybe there is already a place to pitch the tent? Kristina says that anything is possible. A couple of years ago sauna enthusiasts took part in the event, maybe it would be possible to spend the night in their camp.

Speaking of France and coincidences, we should be happy that Vieno prancūzo sandėliukas (One French guy’s pantry), which we visited for this month’s issue, made its debut in the Night of Scents last year, where it invited people to a picnic on the grass. This year, the picnic is planned to be a prelude to Deep Forest. Of course, there are more coincidences. Giedrė Žalytė, the colleague of Linas Daubaras – who presents the therapy of the forest in out magazine – will make a presentation at the Night of the Scents. And could such an event even be possible without perfumer Eglė Jonaitytė? Of course, not. After examining the entire garden in 2020, she created a scent dedicated specifically to this place. Two years ago, it really had linden and rose notes, and this year the smell will be different – after all, nature makes up its own calendar.

While naming new and old mutual acquaintances, Kristina and I also visit one of the newest VMU Botanical Garden stops. It’s a greenhouse full of exotic foods ranging from coffee trees to bell peppers. During the Night of Scents, Sun365 company will invite you to the tasting of their naturally produced ice cream. In general, tastings are very popular during this event, after all, taste and smell cannot do without each other. Tastings are also organized by VMU’s academic community. “First the lecture, then the feast. This is our way of presenting scientists’ discoveries to the public in an attractive way,” my guide smiles inviting me to the presentations of VMU Botanical Garden’s Pomology and Medicinal plant departments that will take place on July 23. Here, you will be able to taste blueberry jelly and various tea mixes, which are not only tasty but also good for your health.

It seems that this is the essence of the Night of Scents. It is not just about walking around and admiring things – oh, how beautiful, and it smells good! – but also about learning how and why everything works and interacts, and after pausing and listening, finding out what gives you the greatest benefit personally. And the participants of the festival offer a variety of ways to do this. Kaunas County Public Library invites you to discover scents through literary classics, Lithuanian fashion designers interpret the properties of plants with the help of design, poets invite you to immerse yourself in fragrant verses while lying on the grass. Even the team of the Lithuanian Zoo presents, for example, how the hair of a giraffe smells.

Of course, you can – and should – just sniff around. How about the traditional competition for the most fragrant plant? Usually, the roses that bloom in July take the lead. By the way, confusion was brought to the competition a couple of years ago by a stack of hay brought to the garden by foresters. It smelled the best to everyone. People “vote” here by pinning flags on their favourite objects. However, it was decided that it is the living plant and not the dead one, that should win, so the hay did not receive an award.

As you have already understood, it was not by chance that the second half of July was chosen for the Night of Scents. “Then you can not only admire the flowers, but there is also something to taste: fruits, berries are ripening, and we also collect medicinal plants,” Kristina says. But what makes the VMU Botanical Garden (and other gardens in the world), which will be celebrating its centenary next year, special is that there is always something new happening here every day. Every time you visit, a new season presents its achievements. So even if you are reading this text after the ninth Night of Scents has already passed, you don’t need to wait for the next jubilee July. After all, in autumn, dahlias will reign here and in terms of these flowers, Kaunas has a lot to be proud of. Three years ago, at the most important continental dahlia variety competition Concours International du Dahlia 2019 Parc Floral de Paris, the second audience prize was won by Freda Kristina Pink dahlia bred by the Head of the Collections Department of the Botanical Garden of VMU, Dr. Arūnas Balsevičius. “As Kristina, I was very pleased. That is the advantage of working in the botanical garden,” my guide laughed. 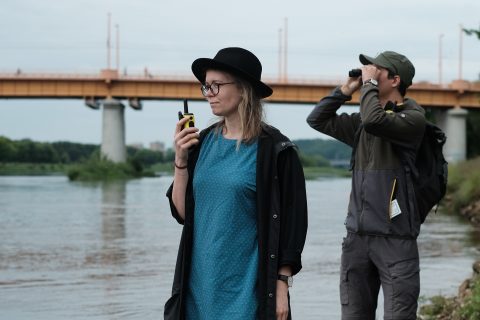 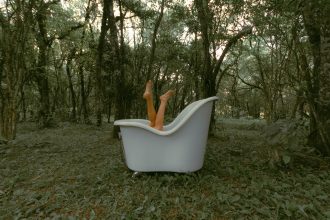