In the fall of 2020, Vytautas Magnus University initiated an open essay writing workshop called City in a Text and Text in a City. This project is a continuing part of Kaunas Literature Week presented in this month’s Kaunas Full of Culture.

The workshop was led by writer, poet, and essayist Laurynas Katkus. The participants learned about the tradition of the essay genre in Lithuania and abroad, its variants and transformations in contemporary literature. They analyzed the texts of famous essayists – Walter Benjamin and Josif Brodsky – as well as texts by the winners of Thomas Mann essay competitions and created their own essays reflecting on the text in the city and the city in the text. Some of these texts (in Lithuanian) will be read live on May 21 at Kaunas Literature Week’s New Winds (Nauji vėjai) event for young authors.

The city varies between private and public texts and speeches, between the desire to be heard and not hear.

A city is a structure. All cities have something in common. Just like a person has arms and legs, which makes them similar to other members of their species, so do cities have streets and churches that make them look alike. The stability and monumentality of the city can give you the impression that it is immutable and lifeless. But it would be a big mistake to think so, because on the contrary – city is an organism. Like the primitive organisms that once crawled out of the ocean, a city is often born by the water, either river or sea (and then becomes a port-city).

As long as you follow the usual route and don’t look around, you don’t notice the whole body of the city. Its heart is a market square with a church steeple, the main artery, where all the blood cells of the city – people – gather so that they would be pushed out to the streets – city’s blood vessels – by the pulse again, carrying news, goods and impressions. Blood pressure rises in the mornings and evenings. It seems like the city walls become elastic and expand to accommodate the stream of people.

The bells ring and pulsate the air of the city. We, the small cells, vibrate to the rhythm of bells: twelve beats, noon, midnight. We fear of not making it, not being able to finish our circle until the next cuckoo call. The city wakes up and falls asleep. In the mornings it quivers from the cold of waking up and in the evenings, it flows with wine and other intoxicating drinks invented by other cities. Its corpuscles become disheveled, get lost in their trajectories and form clots in by-streets.

Sometimes a city gets sick. Suddenly, tumors sprout in the landscapes of a one-time thought, peculiar glass buildings that tend to multiply and expand as if trying to outdo each other. These metastases spread throughout the whole body of the city, deforming its structure. Sometimes the city gets polluted. Like an accumulation of fatty cholesterol, overflowing trash cans sit at the gateways without ever really emptying.

A city would do without its inhabitants, as if it were a bloodless body, but then it would be doomed to assimilation. It would be slowly eaten by nature. Moss, trees and fungi would slowly penetrate through the membrane of its walls. Entropy, diffusion, return to primary chemical compounds. This has already happened to the city of Chernobyl that surrendered to a higher force of nature, anarchy against the structure. You could say that cities, unlike people, have no race. But it’s not true. Let’s look at the dark-skinned Baroque, red-skinned Renaissance or pale-faced Neoclassicism. They even differ in their voices, or more precisely, in their echo – the manner repeating the noise caused by its population.

A city is a matrix. All cities are the same city dressed in different graphics. You might get the impression that its organic but to think so would be a big mistake. Quite the opposite, a city is a code. Like computer programs, the city is, first and foremost, someone’s idea, a drawing programmed to work in a unique way. Why do you think in some cities people tend to fall in love and write poetry and in others they feel lonely and lost, write prose and pursue a career?

While you rush to your bus, it may seem that everything is running smoothly, there are no errors in the program, a city is always whole and complete but why can’t you ever look behind your back? Because there is a programmer behind you and every time you turn around, you see the front again. We are the small lines of code with a sense of space and perspective, a fetish for the senses and philosophical questions about meaning, although we haven’t yet managed to answer what came first – an egg or a chicken. Because both, the egg and the chicken are the lines of code created synchronously for each other like Yin and Yang, like light and shadow, top and bottom. Because everything was planned in advance, written with playwright’s pen soaked in ink once, determined before the beginning.

We all have keys, keys from one or more doors, that limited space in which we are allowed to operate, the matrix cell assigned to us with an inscribed doubt, with curiosity about what lies behind the doors unlocked with other keys. But we would be surprised to learn that there is nothing behind them, there are no written zeros and ones, it is a facade of the door, a smokescreen, an illusion, a cheap trick. A matrix without its inhabitants would become just a picture, dwindling bits. Entropy, deleted files, amnesia, obsolete versions.

Cities can be repeated, moved from one medium to another. The Chinese city of Tianducheng echoed Paris with its Eiffel Tower, gardens, fountains and sculptures. Maybe they can be rewritten, deconstructed and redesigned it in a postmodern way. Near Shanghai in Luodian, you will also find a copy of a Swedish town. The Chinese will invite you to the replicas of English and Dutch cities and a truly impressive Florence-inspired city/shopping center with 200,000 brands where you will be able to update your avatars.

A city is a text. You may find that I am talking about its coherent history and written sources. Yes, the city begins with chronicles, with its own epic, which always turns into a context (that long, unnecessary foreword to the everyday life) when the heights of civilization are reached. The city I am talking about is Babylon. A hotchpotch of words and sentences. A broken dialogue. The texts of the city do not communicate with each other, only declare themselves, written on billboards in different languages and fonts. They claim, invite, offer, take pride, despise, and intercede.

Texts illuminate us with neon, blue light screens, flowing into us with running lines. The first text of the city is its name welcoming with giant volumetric letters when crossing the border, opening the cover of the city. One word, a name, and then pages, empty pages when driving fast down the highway, where signs indicate the number of deaths on the road or the remaining distance to the first section of town. You will be accompanied to your destination by content columns conveniently marked with combinations: A1, A6, A8. And perhaps you’re feeling spontaneous and will turn toward more exotic letters.

The text in the city does not have to be embodied in sound or inscription, it can be recognized as a gesture. A woman passing by baffles with an echoing phrase of French perfume. She hides her face under dark glasses borrowed from Breakfast at Tiffany’s original text. The yellow metal logo on the handbag screams, “I can afford that!” or “Don’t you dear pass by without turning around”, while the woman’s dog barks its threatening monologue at someone it doesn’t know.

The semantics of the city is dense, never silent. Industrial drone, constantly trying to draw attention. City’s texts are always selfish, focused only on themselves, in a hurry to speak. They don’t wait for an answer or a counterargument to what has just been said. Nothing weird about that. The city is designed for coexistence, compromises, well-insulated walls, separate entrances, garages, blinds and opaque curtains.

The city varies between private and public texts and speeches, between the desire to be heard and not hear. City’s texts are like anecdotes, polyphonic songs, slogans, letters to other cities, unwritten memoirs, lost notebooks, memory boards, train tickets and personal documents with an 11-digit code. City’s texts are multi-layered, erased and written down, lost and rediscovered – sometimes in other cities, at other times, like the Independence Act of February 16 found in the German archives in Berlin.

Texts are actualizing again. In the kitchen of the apartment where this text is written, about three decades ago, Aidas Marčėnas exclaimed “I am a genius!” and three decades later, a literary student in the same apartment, curled up in an armchair, writing papers about the same poet’s texts.

It doesn’t contain a playwright writing with a quill that was dipped into ink once. Entropy, lost mediums – there won’t be anything to find in the archives of Berlin. 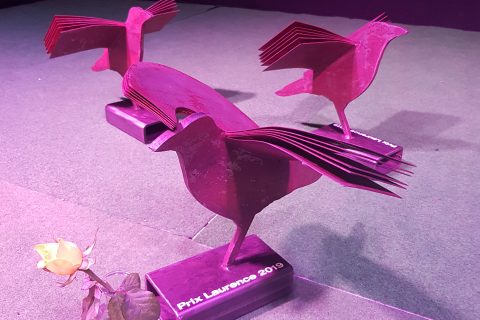 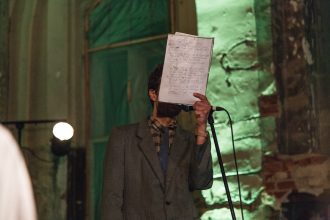