The First Half of the European Capital of Culture: a Record Number of Visitors and International Media Attention

Kaunas is in the midst of the year as the European Capital of Culture, with over 1,000 planned events that will change the cultural face not only of the city but also of the whole country. From record-breaking numbers of visitors to increased media attention, the team of Kaunas 2022 reveals the results of the first half of the year.

“By August, more than 600 events – exhibitions, theatre plays, festivals and concerts – had already been organised in Kaunas and Kaunas district. We estimate that in the first half of the year, more than 800,000 people visited them and more than 6,000 professionals contributed to the programme. It is not just the numbers that are pleasing, but every day we also feel that people are engaged. From the very first day, we wanted it to be a community project that would involve in culture as many residents of the city, professionals, and the young generation as possible,” Virginija Vitkienė, Head of “Kaunas 2022”, says.

Record number of people at events

The most awaited and the most attended event of the “Kaunas 2022” programme was the visit of the Serbian performance artist Marina Abramović and the opening of her retrospective exhibition “Memory of Being”. The public lecture by Abramović was attended by 6,000 admirers of the artist and the exhibition was visited by over 25,000 visitors. Other exhibitions have been equally well attended, for example, more than 27,000 visitors attended the exhibition “That Which We Do Not Remember” by Kentridge, which runs until the end of the year.

The events of the Contemporary Trilogy of Kaunas Myth were also very popular. In January, over 150,000 people watched the cultural “Uprising” in Kaunas in front of the whole of Europe, and in May, “The Confluence” weekend attracted over 300,000 cultural enthusiasts.

“It is not only the involvement of Kaunas residents that is encouraging, but also the fact that the city is becoming increasingly more interesting to the international audience. By July, around 20,000 tourists had visited Kaunas. I think that the well-known names, the events of Capital of Culture have helped to reach the people in countries of Europe. Visitors from abroad are interested in Kaunas modernism, exhibitions, and the newly opened CulturEUkraine Centre for Ukrainian creators. We welcome many Germans, Italians and people from neighbouring countries – Poland, Latvia and Estonia. It is great to see that increasingly more people are coming to Kaunas not for half a day, but for a whole weekend or a few days – there are increasingly more activities to be found here,” Mindaugas Reinikis, Head of the Communication and Marketing Department, says.

According to Mr Reinikis, it was the subject of the European Capital of Culture that was most prominent in the foreign media. “During these six months, Kaunas was visited by 144 journalists from 19 countries. Articles, interviews and reports were produced, reaching a large foreign audience.”

“Kaunas 2022” was mentioned in articles in as many as 62 countries, including not only European countries, but also the USA, India, the United Arab Emirates, Canada, South Africa and Singapore. Readers of media portals such as the BBC, CNN, TIME, The Guardian, The Telegraph, Deutsche Welle and the Financial Times have learned about Kaunas.

Even more culture as autumn approaches

According to the Director of “Kaunas 2022” Vitkienė, the impressive results of the first half of the year are not yet final. “These figures only reflect statistics for the months from January to June. In the summer, we invited visitors to several events: the contemporary city festival “Audra”, the performing arts festival “ConTempo”, and the Citytelling festival. Finally, the autumn will be full of events. Therefore, we are looking forward to sharing even better results at the beginning of 2023.”

The upcoming autumn will indeed bring even more cultural experiences to Kaunas. The following events that started in the summer will continue until the end of November: the Festival of Stories that will continue to revive the multi-ethnic memory of Kaunas and its surroundings, Jenny Kagan’s exhibition “Out of the Darkness”, which will present the history of the Kaunas Ghetto, the exhibition “The Learning Garden of Freedom”, which will be dedicated to the works of Yoko Ono, the premiere of the film “Folds”, a film that has travelled around the world, which is devoted to the modernism of Kaunas, and the Fluxus Festival, which is loved by the residents of the city.

The full programme of “Kaunas 2022” is available at www.kaunas2022.eu or on the mobile app. 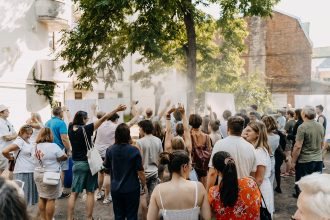 ConTempo festival has turned Kaunas into a prominent European city. What’s next?